The Job That Made Me Face Death

It wasn’t the ridiculous job delivering balloons, in a clown suit, to couples in restaurants during my high schools years. Nor was it my job as a janitor for a local newspaper where I was on my knees peeling pieces of copy from a stubborn Berber carpet, cleaning toilets, or clearing out the stale food in the fridge on Sundays to serve to the homeless couple living on the infested couch in the back alley behind the building.

1985: The Dark Ages Before the Internet

Those were memorable jobs but not the types of jobs that make a mark on your life but rather they were jobs that reminded you that education is a good thing! The most impactful and impact filled job I ever experienced: Sales Representative for one of the world’s largest printing companies. My first job out of college in 1985, paying the kingly sum of $19,200 per year, was a crash course in life.

The setting pre-Internet dark ages, was a simple course in survival of the fittest. My job was to cold call door-to-door to businesses in the San Francisco produce district, including Hunters Point and 3rd Street, all the way to Candlestick Park. No cell phone, no laptop, little communication. The level of rejection was epic and the dangers sometimes imminent when gunshots would ring out on a lazy Friday afternoon deep into the Point.

Most meetings were cordial even fun but when the numbers got tight and the pressure from the home office was high, we endured a Glengarry Glen Ross style sales meeting. You know, or maybe you don’t, the type of meeting where pressure was exerted, jobs were threatened, laughter was a scarce commodity. In the end of these sessions, we would huddle up for a pep talk that would somehow take the edge off the ass-chewing we had just received. Gender was not a shield as male as well as female reps were “called on the carpet” in front of their peers to “explain themselves” aka what the hell happened out there last week?

None of this survival of the fittest environment would impact me as greatly as an assignment I was handed 3 months into my job on a high energy Friday in the middle of summer. My assignment was to go out to a new account, for which I was being given the chance to manage, meet the principal and make a good impression. The business: The San Francisco AIDS Foundation in the heart of the Castro district.

My Life Changed But I Didn’t Know It Yet

I had heard of AIDS but I was completely unaware of the magnitude of the epidemic that was about to slam into our country ferociously killing friends, family, and neighbors alike. Instead I was nervous, having been unabashedly ripped and teased by my colleagues, about heading into the Castro. I was a inexperienced straight kid with little knowledge of what it meant to be gay and face the discrimination these people faced. All my collection of friends and colleagues knew, at the time, was the paranoid stereotypes foisted upon us by older adults and a less than forgiving media.

Have You Ever Seen the Face of Death?

The life altering impact of my visit began as I opened the door and was greeted with the gaunt frailty and far-away stares of sick men appearing more like Auschwitz victims than citizen of a vibrant San Francisco. Open, oozing sores both dark and large were visible on many who were seated in the waiting room. The receptionist, seeing my innocence, quickly ushered me into a separate room to wait on the office manager who would be my contact.

My contact greeted me with a kind smile and handshake of reassurance. He told me he greatly appreciated me visiting and he related how difficult it had been to get other vendors to service the account let alone visit their clinic. Prior to entering the building, I had endured the first catcall I had ever received – by a man. It both scared me and acted as a reminder – I never catcalled a woman in my life after that experience. I thanked my new customer and assured him I would be visiting once a month to check on their printing needs.

I visited the AIDS Foundation offices throughout 1986. And each visit was a reminder of how lucky I was, the devastation I was seeing first hand, and the maturation process I was undergoing. 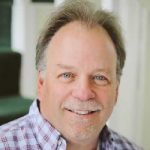 Today, having lost two friends to the AIDS virus, one gay man and one straight man, I look back on that job  and rejoice in the lessons I learned, cringe at the abuse I endured, and marveled at the relationships I made.